To have the optimal experience while using this site, you will need to update your browser. You may want to try one of the following alternatives:

Congratulations to USO Sailor of the Year

She was traveling over the Coronado Bridge near San Diego, California, returning to her on base residence when she noticed a stranded motorist outside his vehicle. Singer asked if he needed any help, and the driver responded that he was fine.

Something in the manner of the driver’s response triggered her intuition and made her feel that something was not right. She noticed the driver putting a rope around his neck. As he was putting a foot on the barrier to jump over the side, Singer rushed to his side, pulling him back. Startled, she grabbed him and asked what he was doing. He coolly responded by saying that today was the day he was going to die.

While Singer was holding the driver, she noticed a knife on the barrier ledge. She cut the rope from around his neck, dropped the knife and kicked it underneath the car. She then identified a gun in his pocket. She removed the firearm and directed other stopped motorists to lock the gun securely in the trunk and call 911.

She stayed with the suicidal driver until the California Highway Patrol arrived. Singer’s willingness to assist a stranger undoubtedly resulted in saving his life. https://coronadotimes.com/news/2020/12/17/uso-sailor-of-the-year-saved-stranger-on-coronado-bridge/

Coronado is decorated and festive with holiday lights, and on Monday, December 21, 2020, Coronado residents should look to the skies after sunset for a rare sighting of the bright “Christmas Star.”

The “Christmas Star” isn’t actually a star – it occurs when Jupiter and Saturn are so close to each other that they appear as a single, bright light. The planets will still be hundreds of millions of miles apart, but they appear close because of their position in orbit. This alignment of the planets was last witnessed in 1226 – almost 800 years ago. Astronomers believe there might have been a “Christmas Star” in 1623, but it occurred during sunlight hours so was not visible.

Astronomers named this rare alignment of planets the “Christmas Star” as it might have been what’s referred to as the Star of Bethlehem that guided the three wise men to Bethlehem for the birth of Jesus. While there is some scientific debate if this planet alignment occurred during the year of Jesus’ birth, the event continues to be commonly referred to as the “Christmas Star.”

Viewers wishing to see the ‘star’ should look southwest during the hour after the 4:47pm sunset on December 21, 2020. It will appear like a bright, still airplane, but will not be as bright as the moon. The ‘star’ will be low in the horizon so viewers will need a site unobstructed by trees or buildings. Coronado North Beach, Central Beach, and Shores Beach should provide excellent viewing locations. AccuWeather’s current forecast for the afternoon of December 21 shows mostly sunny skies with 21% cloud cover.

Due to COVID, the Old Goats and Kids Who Care have modified their annual salute to the wounded warriors for 2020 to include other heroes and at the same time benefit local restaurants and employees.

Wounded warriors, first responders, health care workers, and families will be invited to dinner at a Coronado restaurant (currently for take-out or delivery only). Instead of a gift certificate, each honoree will be individually contacted by the restaurant to personalize the experience. Each meal will include a 25% tip for the restaurant employee, so those employees can be helped in a small way.

Instead of a reception as in past years, the Old Goats asks the community to join them in hosting a wounded warrior or other deserving recipient (first responders, health care workers, young military families in need) at one of their participating Coronado restaurants during this holiday season. Restaurants, so far, include Bistro d’Asia, Blue Bridge Hospitality Group restaurants, Brigantine, Island Pasta, Costa Azul, and Miguel’s. The funds that would have been used for a reception have been redirected and the Old Goats and Kids Who Care are hoping to expand this program and continue it for as long as the COVID restrictions hurt our restaurants and their employees.

Official Cleanup and Restoration Company of the PGA Tour 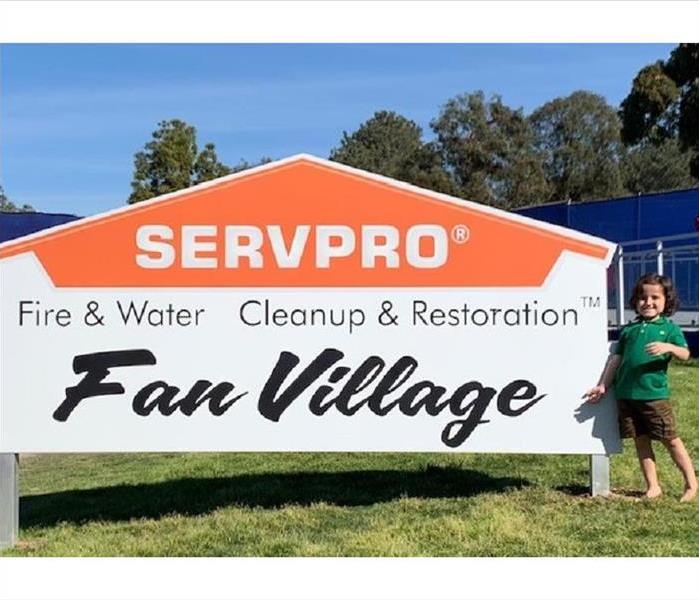 Proud Sponsor of the PGA Tour

The PGA Tour is making it's annual stop in San Diego this week.  The Farmers Open, which is played at Torrey Pines, begins play on Thursday January 24th, and concludes on Sunday, January 27th.

SERVPRO has extended it's partnership with the PGA through the 2020 season.  According to Sue Steen, SERVPRO Industries, Inc., chief executive officer, "The entire SERVPRO family is proud to be associated with the prestigious and well-respected PGA Tour. This sponsorship allows us to showcase our capabilities not only to the communities where PGA events are held, but also to the huge television and online audience that follows the Tour. Both individual property owners and commercial facility owners will have the opportunity to learn about SERVPRO and the services offered as they enjoy watching the world's best players compete on the world's most beautiful golf courses."

The Farmers Open has strong ties to San Diego with past champions such as Billy Casper, Gene Littler, and current PGA Standout, Xander Schauffele, who played collegiate golf at San Diego State.

SERVPRO of Coronado / San Diego Bay SW is also a preferred vendor for Farmers Insurance, so this is one of our favorite weeks of the year. We are available locally in our community, ready to respond at a moment’s notice if things go wrong at your home or business.

SERVPRO of Coronado / San Diego Bay SW specializes in disaster restoration, cleanup and repair services, helping to remediate damage, making it “Like it never even happened” for both commercial and residential customers. 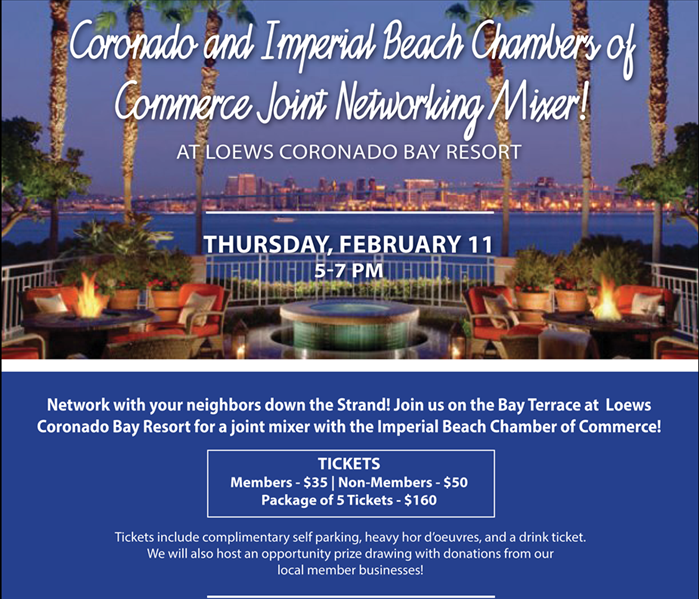 On February 11th 2016, SERVPRO of Coronado/Imperial Beach/National City attended this event hosted jointly by the Coronado and Imperial Beach Chambers of Commerce. The event was held at the Loews Coronado Bay Resort and Spa.

A hot topic of discussion with many in attendance was disaster preparedness. SERVPRO of Coronado/Imperial Beach/National City was happy to discuss our ERP (Emergency Ready Profile) system with all of the local business leaders, the Coronado City Management team and the Mayor of Imperial Beach, Serge Dedina. 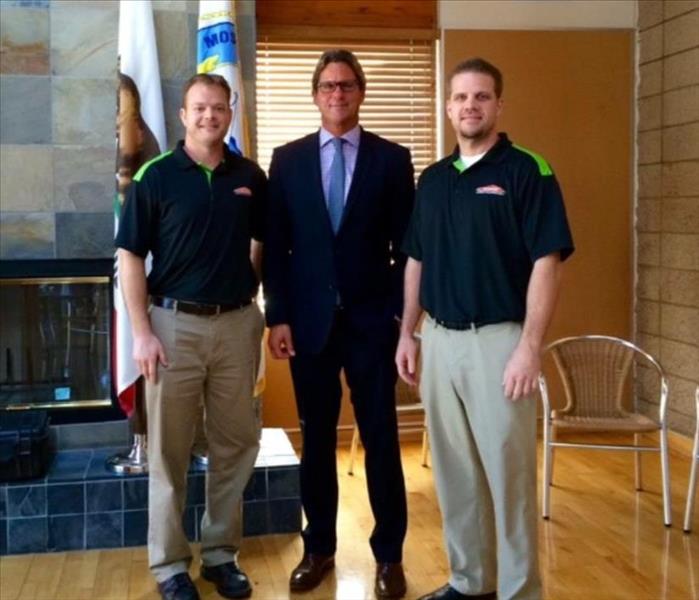 It was a great pleasure meeting the new Imperial Beach Mayor, Serge Dedina last month at the Chamber of Commerce breakfast. SERVPRO of Coronado/Imperial Beach/National City is excited to get involved and help contribute to the goals of the city and community.

Proud Member of the Coronado Chamber of Commerce

We are very proud to announce that SERVPRO of Coronado/Imperial Beach/National City was introduced as the newest member of the Coronado Chamber of Commmerce at the most recent Chamber Sundowner on 2/19/15. The event was held at the Il Fornaio restaurant near the Coronado Ferry Landing.

The Coronado Chamber of Commerce is a pro-active membership organization. The Chamber strives to foster prosperity and champion local business by providing resources and leadership to advance economic development, by advocating the position of the business community as a whole and by enhancing the quality of community life in Coronado.